'Third World Assassins': U.S. Medical Authorities Just Don't Get It, Do They?

Still another immigrant physician - this one in Texas with a history of sexually abusing female patients - has been sentenced to 10 years in state prison. Doctor Donald Ozumba, age 45, was convicted Friday by a superior court jury on the felony of Aggravated Sexual Assault of an elderly person. According to the Collin County prosecutors, the case of Ozumba victimizing patients was the worst physician abuse case they had ever encountered. According to the prosecution, at least 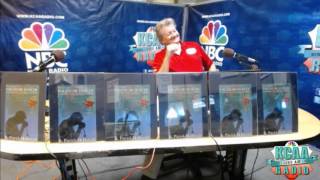 The 'Paramedic Heretic' on Radio - Listen up. Get Smarter About Medical Dark Matter

Occasionally we think it appropriate to tip our cap to the thousands upon thousands of physicians in our nation who aren’t the least bit criminal. In fact, some of these guys and gals have figured ways to be downright upright, without committing any crime at all. They treat their patients with respect; save a few lives and – in their downtime – actually deem to entertain us with some mighty fine poetry. And God love them. Enjoy these scribblings of stethoscope scriveners. O

A New York City physician might well get to spend the rest of his wasted life in prison, all because a federal court jury in Brooklyn convicted him last Wednesday of selling powerful narcotics to numerous patients for fun and profit. At least one of those patients died. Doctor Martin Tesher was found guilty on 10 felony charges of illegally prescribing fentanyl and oxycodone, according to the U.S. Attorney for the Eastern District. Tesher, age 82, faces a minimum sentence of

In Brazil, a celebrity "butt-enhancement" surgeon known to his mentally-challenged fans as "Doctor BumBum" now finds himself behind bars, after performing a highly dangerous, totally unnecessary injection procedure that killed his most recent patient. Doctor Denis Furtado, age 45, was arrested last Thursday after hiding from police for several days when he learned they had already arrested the doctor’s mother, his nurse and his 19-year-old girlfriend, who helped with his, "We

5 Years Ago Today: A Look Back at One of Thousands of Physician Murderers

(Here's a story we covered in July, 2013) Doctor Buys Cyanide. Wife Dies of Cyanide Poisoning. Doctor Now in Jail for Murder. Any Questions? Let us guess: you still think these are the smartest people in the room? In Pittsburgh Pennsylvania, Doctor Robert Ferrante – a University of Pittsburgh professor of neurosurgery – has been charged with killing his wife, also a doctor on staff. This, after investigators searched his laboratory at the University, as well as his home. Fer

Interview with K. Patrick McDonald, Author of "The Paramedic Heretic"

Reading and Writing Addiction was able to catch up with Patrick McDonald, Author of Paramedic Heretic: Immutable Laws and Ethical Illusions, for an interview. We are excited to share this insightful interview today with our readers. RAWA: Patrick, when did you first discover that you were a writer? KPM: When I was a youngster growing up in Indiana, I was sent to a small, very strict private school called St. Michael’s Academy. I was so shy that I found it very hard to even lo

Drain the swamp? Well, President Trump is certainly out to drain the “medical swamp.” The U.S. healthcare system is plagued by rampant fraud, abuse and profiteering carried out by dishonest doctors and pharmacists. In working to combat the rampant fraud, the DOJ has announced an unprecedented crackdown on medical fraud, charging over 600 people with criminal activities that involved over $2 billion medical fraud. U.S. Attorney General Jeff Sessions delivered prepared remarks,

Criminal Immigrant Physicians Are Convicted Every Week. And We Keep Right on Letting Them in

In Montgomery Alabama another immigrant criminal-physician - already found guilty of Medical Fraud in federal court - was sentenced June 28 on separate crimes in state court, too. You just have to love these lab-coat gifts to society, do you not? Their crime sprees just never stop. This one defrauded 5 U.S. healthcare providers and sent the cash back to the Middle East. In the sequestered halls of hospitals we call these idiots Third World Assassins. Doctor Rassan Tarabein, a

Well, here's a spoonful of uplifting news. The 'Dancing Doctor' isn't a doctor anymore. The Georgia Composite Medical Board has intervened and suspended this self-centered nitwit's medical license. Which reiterates that every now and then . . . lightning does strike the right person - this particular one in suburban Atlanta Georgia. Her name is Windell Boutte and - wacky in the head that she is - she still seems resolutely proud of her worldwide fame - attention she's gaine
1
2